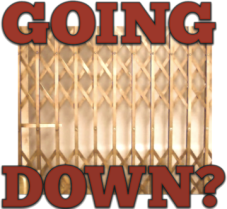 I once had a love/hate relationship with an elevator. I worked at the time in the sprawling McCarty-Holman 1920s era warehouse on Mill Street, in the Jitney Jungle corporate offices.

One gained access to our offices by a narrow flight of stairs built at an absurdly shallow angle. These much longer than necessary stairs zig-zagged thru four upward flights, divided by a short landing. Or – you could take a painfully slow, archaic elevator.

I use the term ‘elevator’ in a loose, technical sense. It could be best described as a metal cage. It invoked visions of a solitary confinement jail cell. But these doors ‘scissored‘ open and closed. Thankfully, the lower portion of the 3 cage-like walls were covered, but not the upper portions which revealed the stained brick walls of the elevator shaft, barely six inches away at most.

It was claustrophobic, no more than four feet square at the base. The load capacity of this rickety contraption was four.

More than a few people are nervous in any elevator, but this one had a quite higher than average fear-factor. Most folks took the stairs.

But I must say, this mechanical fossil had one redeeming feature; a beautiful art nouveau ceiling light medallion. The company closed in 2001, and I wanted that medallion, but it was not mine to take. Years later, fire took everything when the old building burned to the ground. Bitter/sweet memories of that old elevator remain.

Perhaps someday I’ll write a horror story featuring that infernal contraption. Unsuspecting souls will enter the prison-like cage and presses the button. Be it up or down, the devilish machine will always go DOWN. And as it descends faster and faster downward – the dirty brick walls appearing to be racing upward just inches away – it will descend faster and ever faster down into the very bowels of the earth. It makes your mind scream in terror.

That’s as much of the story as I care to think about right now!