Perhaps you remember when Steve Martin was on Saturday Night Live and did a skit featuring a ‘wild and crazy guy.’  Now I’ve never really been known as one of those, but once while in high school, I did come close… very close.

It was the summer of 1957, between the 10th and 11th grades at Central High..  Our family took a week long and many miles long motor trip from our home in Jackson, Mississippi diagonally north/westward across the nation to the sleepily little town of Glacier, Washington… perhaps 20 miles east of the East coast and 5 to 7 miles south of the Canadian border.  This little town was the last settlement at the foot of Mount Baker, along the end of a dead-end highway 542.

My mother’s uncle lived in Glacier, and the family had not seen him in many years.  Uncle Ed worked in the logging industry, operating a crane which loaded cut logs onto trucks which transported them down the mountain.

In the winter, Glacier was a bustling ski mecca.  But we were there in summer.  Although there was snow on the mountain (my sister and I tobogganed down the slopes) it was not the tourist ski season while we were there.  According to our map, the census said that Glacier had a resident population of only 25.  We were there 3 days and I only laid eyes on 7… including my own family!

Uncle Ed invited two of his closest friends over to meet us.  These two middle-aged ‘mountain men’ owned and operated a gold mine on Mount Baker!  I was enraptured by the tales they told on one-another… and about Uncle Ed.

The day before we left, the two miners asked if I’d like to come back the next summer, and work in the mine with them.  Uncle Ed said he’d enjoy the company if I wanted to return.  Would I?  YES!!!

In my tender 16 year old brain, this was the chance of a life-time!  I’d never been so crazy-adventurous.  This was my unbelievable chance to try my hand at becoming a wild and crazy guy!  My mind went wild.  I decided that I’d (try to) grow a beard… and grow my hair out… and bleach it blonde!  When school started the in fall of my return from Mount Baker, no one would recognize me… the wild and crazy guy!

When school started in the fall of ’57, my dreams of a beard and bleached hair deep inside a gold mine were shattered by a tiny imp with a bow and arrow… brought on by a cute, seductive blonde in eleventh grade American History class. My heart began to skip beats, and my hormones went on over-time.  Basically, I traded my plans for blonde hair for the blonde across the room.

So much for my dreams of becoming a wild and crazy guy!

In the early 50s, when most radio was still AM only, I was big time into radio.  I even built two shortwave kits.

Our big thrill was ‘finding’ impossibly distant stations, which was often possible due to atmospheric conditions, especially late at night.  I had a map attached to a cork board, and used push-pins to ‘highlight’ the locations of these far flung audio discoveries.

Our brains and our hearts also have something similar to push-pins… recording and proclaiming special events and moments which we’ve deemed as extra-special, and worthy of memory.  Some of these are unique to us, and for us… their special meanings lost on others.  So be it.

I had such a push-pin moment in early 1964.  It was so strange, so bizarre, so ‘other worldly’ that I have difficulty describing it now, let along explaining it!  I know that it did have, or must have had, some military implications.

I had three years of ROTC in high school.  Military training was not new to me.  But ROTC was not much more than a ‘subject’ one took in high school.  We had breakfast at home, slept in our own beds at night. We were basically free to do what we wanted the other class periods.  Not so in the USAF!

The ‘real’ military is 24 hours a day, 7 days a week.  And in a real sense, it’s somewhat like being in prison.  Others, many others, are ALWAYS in control over you.  They tell you what to do, what to say, where to go, and of course–the what nots of all of those.

Now I was home.  Now I was free.  Now there were not a dozen different sergeants and lieutenants telling me to do this, don’t do that.  I found myself having difficulty re-adjusting to freedom and being out from under someone’s thumb.  The relief from that pressure was disconcerting.  This, I believe, was the genesis of my unique push-pin moment.

The place where it happened was West Capitol Street, in Jackson, MS.  I was standing in line at the Dairy Queen.  It was a popular place, and one usually had to wait in line.  I can’t remember what was going on in my mind at the time, but this I know, I was relishing the moment… I was home, and I was (somewhat uncomfortably) free.

I gazed East, down Capitol Street.  It was a bright day, sunny, and colorful.  This all to common landscape looked especially beautiful this day.  I found myself appreciating it with all new meaning and depth.  And then it happened–suddenly–out if nowhere… the entire scene suddenly ‘morphed’ before my very eyes.  I saw this common sight, I saw the world, thru ‘different’ eyes!

Whereas only moments before, I viewed the world as covered with asphalt and concrete.  This man-made covering had been sub-divided into squares, rectangles, and various shapes which we call ‘blocks’ and ‘tracts’ of land.  After all–the roads lead ‘everywhere’ don’t they, so they must cover ‘everything?’  It was as if I had previously interpreted all grassy areas as ‘additions to’ a concrete/asphalt world.

But in this moment I suddenly saw green grass, trees, shrubs, flowers–living things, as they really are!  This was the world!  The asphalt, the concrete, were but ugly streaks… lines which cut across the beautiful earth.  I suddenly saw what this view would be if Capitol Street was suddenly ripped away!  Everything took on an all new beauty and meaning.

I suppose you don’t, or can’t understand what happened to me that day.  Perhaps that moment was just too personal, too–Bill Murphy.  You know how he is!  Or perhaps you’ve always seen the world the way it really is, a great big blue and green ball bisected with asphalt and concrete streets and highways.  Perhaps I was only ‘getting it’ that morning… and everyone else already had it.

But I did have that moment.  And to me, it was special, a true push-pin moment. 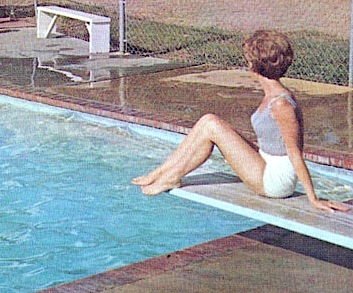 Divorce is not a common thing in my extended family. Of the fifteen children of my grandparents, only two aunts divorced, both due to wandering husbands. One of those couples later remarried. So when my first marriage failed – I took it hard. The marriage was a failure, and I felt like a failure. I was taught that marriage is for keeps.

The circa 1960 photo at left from a postcard, is NOT the subject above –  although anyone who knows her would swear it is. It’s not kosher to have pics of old flames /wives laying around.

A few years after that failed marriage, love and marriage redeemed themselves in the form of Helen Carol Ringer Rainey. She and her 3 daughters Liz 4, Tricia 2, and Lois – new born, became not just a part of my life, but the very center of my life. Please see the post, ‘The Year That Changed It All.’

One Saturday afternoon years after Carol and I married, our 4 grammar school age girls were spending the day with my Mom. To keep the tykes entertained, Mom gave them old family photo albums to explore.

Now my Mom and I are alike in that we seldom throw away anything.  The girls discovered a photo of a pretty, young bride. “Who’s this?” they innocently asked.

The girls had found a picture of their dad’s first wife! To this day, we all continue to refer to her as ‘Aunt Penny.’

We were high school sweethearts, Aunt Penny and I. We came together through a simple misunderstanding. She and I were in the same history class. At the time, she had the hots for a boy who lived across the street from her grandfather 100+ miles north. The boy’s name was Billy Frye. As love-sick girls are apt to do, she’d written ‘Penny + Billy’ on the front of her notebook. Another of our class-mates spotted her little love notation, and assumed that this ‘Billy’ must surely be yours truly. So my buddy suggested that I invite her out on a double date. Our first date was on December 7th – Pearl Harbor Day.

I don’t know if I won out over the other Billy or if she simply opted for a Billy closer to home, because by the next weekend we were going steady. That second date was Friday – the 13th!

I suppose we were your typical 50s couple, doing all the silly stuff only adolescents dare. We talked on the phone endlessly about nothing, passed notes in class, walked the halls hand in hand, and made impossible plans. We were young and foolish, far too wrapped up in one another to be much a part of our high school scene. We claimed to be in love, yet neither of us truly understood the definition of real love. This failure did nothing to enhance our continuing relationship.

We wanted to marry right out of high school but got resistance from our parents. “Wait a year, maybe two.” If we’d waited two, we probably never would have married. She got a job in Jackson and off to Mississippi State I went to study aeronautical engineering, and to wait out that year.

I only missed two weekends coming home that year. Several of my hometown pals rode back and forth with me on occasion. Because I always left Jackson as late as possible those Sunday nights, one of them named my car ‘The Midnight Cannonball.’ Another replied, “At least the sun’s not in our eyes.”

The wedding was in her home. It lasted 12 minutes flat, reception following. I think I still have the 8mm home movies.

The divorce came seven years later. Of course there were good times in between, but I’ll save that for later. The last time we saw one another was the day she drove off into the sunset, April Fool’s Day of 1968. We had a thing about special dates.

Years later, Carol and I we were cleaning up after a successful garage sale when she commented, “Well now I’ve gotten rid of everything that once belonged to Aunt Penny.” “No you haven’t,” I replied, “You still have me!”

And she still does!