This piece was a writing assignment from my Little Egypt Writer’s Society group. Our assignment was to recall an event when we wished we could hide in a hole. You’ve probably been there – done that also.

THE URGE TO CRAWL IN A HOLE 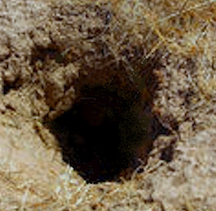 I too have had my moments when I wished for vanishing dust, or a handy, empty hole. Two of these embarrassing events stand out above all others, both similar in nature.

In 1954 our Methodist church received a new pastor, with THREE daughters. I was all starry eyed over the youngest. We were 13 at the time.

Sunday afternoons we had MYF – Methodist Youth Fellowship – which was just what the name implied, a time when the young folks of our Methodist church fellowshipped together with sports, games, snacks, and a short spiritual message. Several of us were gathered on the front steps of the Fellowship Hall. Myself and two other boys were seated on the top step. The object of my affection was standing with a few girls rather close to the steps. We each had large glasses of iced tea. Glass. Clear, transparent glass.

I have no idea what caused ‘the event.’ I had no allergies, no sniffles, no congestion. (You see what’s coming.)

I was about to sip my tea, or perhaps just had. My glass was at about chest height, fortunately far from my nose. Then it happened. The sneeze was like a sudden spasm,  unexpected, and with force. Just the sneeze would have been ok, for the tea stayed in the glass.

Amid that sudden blast of air, from my nostrils was ejected an exceedingly huge mass of what may well have been fully grown jellyfish – right into my iced tea. I was relieved to see that my tea was the only victim of this terrible assault. But here I sat with a large, transparent glass of tea with ice, sugar, lemon, and – yuck! Oh the horror.

While looking for a hole, I held my glass in my trembling hands. Looking all the world like a sun-burned indian. I hoped no one would notice why I was no longer drinking my tea. At 13, this was a catastrophic, thoroughly mortifying event.

Fast forward around 15 years. I was successfully employed as a commercial artist. As in most fields, there’s usually room for advancement with other companies. The Yellow Pages was looking for new commercial artist. I met with the Ad Director at a downtown restaurant for an interview over coffee. This time I had my beverage much, much closer to my lips/nose.

There was no ‘jellyfish‘ involved this time, but the prospective boss was thoroughly sprayed with a blast of coffee, well laced with both cream and sugar. Sadly, the floors were solid in the restaurant, with no holes in sight. Likewise, there was also no follow-up call for a second interview.