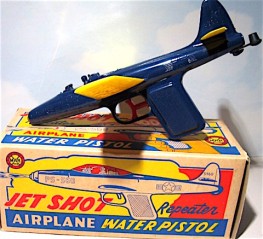 Bob Hope had it right!  We can be thankful for some memories.  But for a toy?

A few of my childhood toys bring back memories…. like the large 3-wheel bike, without brakes.  I was 5 or 6 at the time.  The thing was really an oversized, stretched tricycle.   Boy was it fast!  I discovered that the very first time I rode it.

Dad unloaded the new toy at our driveway, and I immediately took off, lickety-split down Evergreen.  I should have gone in the other direction.  I was rapidly approaching busy Terry Road when I discovered the thing had no brakes.  I managed to pull off the sidewalk as I neared Mrs. Busby’s house, hoping I could slow it down in her front yard, or perhaps, as I circled her house.  I did neither.  Instead, I crashed full-tilt into the large tree, with larger roots, at the end of her driveway.  I think I went 5 feet UP that tree!

But the toy which brought me at least as much pleasure, but with none of the pain, was a unique water-gun.  My guess is that it came from H.L.Greens, downtown.  It probably costs no more than 50c.  But it gave me many, many happy hours of flying and fighting fun!  This water pistol was made in the shape of an airplane!

Jets were new at the time, and this toy was a close replica of the all new U.S. Air Force Republic F-84 Thunderjet.  I’d fill ‘er up, grab the handle, and take off… zooming into action… on search and destroy missions all around our yard.  I’d sweep down low… making my best jet-fighter sounds… and strafed anything and everything that moved: enemy tanks (roly-polies), ants (troops), crickets (vehicles), and worst of all, evil spiders, (artillery)!  The fun only stopped when I was forced to return to base to re-fuel and re-arm.

A few months ago I saw this one pictured above (with missing canopy) for sale on eBay. Someone obviously knew just how much unadulterated fun was contained in this small plastic toy – because I could have purchased several dozen cases of them way back when… for what they wanted for this single item today! 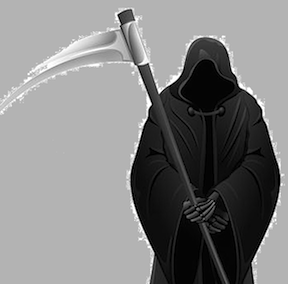 Death presented itself early in my life.

The first death of which I was aware effected me in a profound way. It was the sudden and unexpected death of my uncle in Bogalusa, LA, on October 1, 1946. I was 5 at the time.

Uncle Fred was the husband of my mother’s older sister, Lily Padget. To family and friends, she was known simply as ‘Sister.’ After Uncle Fred’s death Sister moved to Jackson (MS) to live with her parents (my grandparents), who lived next door to my family on Evergreen. Sister was always dear to me, but living next door, she became someone very dear to my heart. Sister and I were always close – even more so after Uncle Fred’s death. I treasure my many years with Sister.

It was the death of my beloved grandfather, Patrick Henry Fairchild, Mom’s father. I was old enough by this time to realize what had happened, and experienced the heavy loss his death dealt to me. He had been my ‘best buddy‘ for 7 years.

My parents were very ‘protective’ of my sister and me. We were kept away from the funeral home and grave service. But I keenly remember the day he died. He’d been taken downtown to Jackson Infirmary, located on the corner of North President and Amite. My sister and I were required to sit outside in the car as the adults went inside. In that era, hospitals didn’t allow small children as visitors. An older cousin sat with us. We sensed that something ominous was happening. The profound grief expressed my my mother told it all.

My next experience with death came only a few years later. I can’t recall the exact year. I was in the 4th or 5th grade. What’s ‘amazing’ about this is that I know I was YOUNG – 9 or 10 at most.

A younger lad from our church was tragically killed in an auto accident – and 5 other boys of around my age were enlisted as pallbearers. (We had adult men at the head and foot as assistance.) I supposed by this time Mom and Dad had lifted some of their protective blanket.

Most folks have never heard of children serving as pallbearers for other children. That experience is etched in my mind. I recall those halting steps to the grave side as if it were only yesterday. Perhaps the reason why memory remains so vivid is because of my fear of tripping that day, and not of death.

I had an unusual friend in the 6th grade, Eldridge Hawkins. He and I were polar opposites.

I came from a solidly stable, loving family. From what I heard from him, his family was a bit different from ours. He was older than the other kids, maybe having failed a few years. He was quite rough around the edges, and due to his age, larger than most of us. But I became good friends with this boy from what some called ‘across the tracks’. My mother didn’t approve. We never hung out together away from school, but were usually together on the playground.

Again, I’m not sure of the date. I have the newspaper clipping which Mom pasted into my grade school photo album. She didn’t included the dateline.

But Eldridge and a boy who live down the street from us on Evergreen – hung a long rope off a railroad trestle spanning a large creek and were swinging from it. Eldridge slipped and fell into the creek – and drowned.

Earlier in the school year, for show and tell I had taken to class an 8 x 10 photo of my Grandfather Fairchild standing in front of the locomotive he engineered. When passed by Eldridge, he signed his name on the back! That photo now has two tangible remembrances attached to it – that of my beloved grandfather, and of my friend, Eldridge Hawkins.

Many of my classmates at George Elementary School followed me to Enochs Junior High, and on to Central High. Death came back to visit us with a vengeance at Central. Over the course of those 3 years, death claimed 7 of our classmates, the last one on graduation night.

At least one died of cancer. Several had sudden, fatal heart attacks. One of those deaths came to a classmate in ROTC. He was buried in his Army ROTC uniform. His was a military-style funeral. Although I enjoyed every minute – well, to be honest, most minutes of ROTC, I didn’t want to ‘spend eternity’ in uniform! I made my parents promise that if something should happen to me – I wanted CIVILIAN clothing – or else I’d come back to haunt them!

No doubt, we’ve all come close to death in our lifetimes and never known it. But once I was told just how close I’d actually come.

I’d had a persistent cough for several weeks, treating it myself with off the shelf remedies. But finally, very late one afternoon, my cough morphed into fever and pain. I could not stand erect. I should have gone straight to the emergency room, but didn’t. The next morning it was worse – so we went straight to my doctor’s office – only blocks from Baptist Hospital. After examining me, he FOLLOWED us to the hospital, where he orchestrated my immediate admission. Within minutes, he inserted a long metal rod into my side, between my ribs, and into my lung – all without sedation! Afterwards, he explained to my wife (Carol) that he’d never removed that much fluid from a person who survived! He said that should I have delayed treatment longer, within hours I would have been gone. What a sobering thought. And – oh what a fool I’d been for my delay in seeking treatment.

I wrote this essay on death neither because I’m fascinated with the subject, nor that I fear it. Truthfully, death is simply a part of life. It may be the end of mortal life as we experience it in the here and now – but it’s far from the end of life as we know it to be. I’ve been blessed to walk in many amazing, historic, astounding and truly breathtaking places. I’ve walked where kings and queens have walked – where presidents, dignitaries and famous military, science, entertainment and sports celebrities trod.

But I’ve never walked on gold.

It’s funny how we mortals view golden streets as the very pinnacle of paving materials – after all, we pave streets with common materials, asphalt, concrete, sea shells, rocks and stones. But then, God does this also! In heaven, gold is an everyday, common commodity – only fit to walk on!

I hope to see you there!